Following the September second and third-week sell-off, the Ethereum price plummeted to $1230 support. Moreover, this downfall hitting a low level such as 0.786 Fibonacci retracement level weakens the possibility of price recovery. Furthermore, the coin chart showed the formation of an inverted pennant pattern increased the probability of a prolonged correction.

The Ethereum price has been trapped in a no-trading zone for the last two weeks.
The $1230 breakdown will undermine the July-August recovery
The intraday trading volume in Ethereum is $7.5 Billion, indicating a loss of 47%. 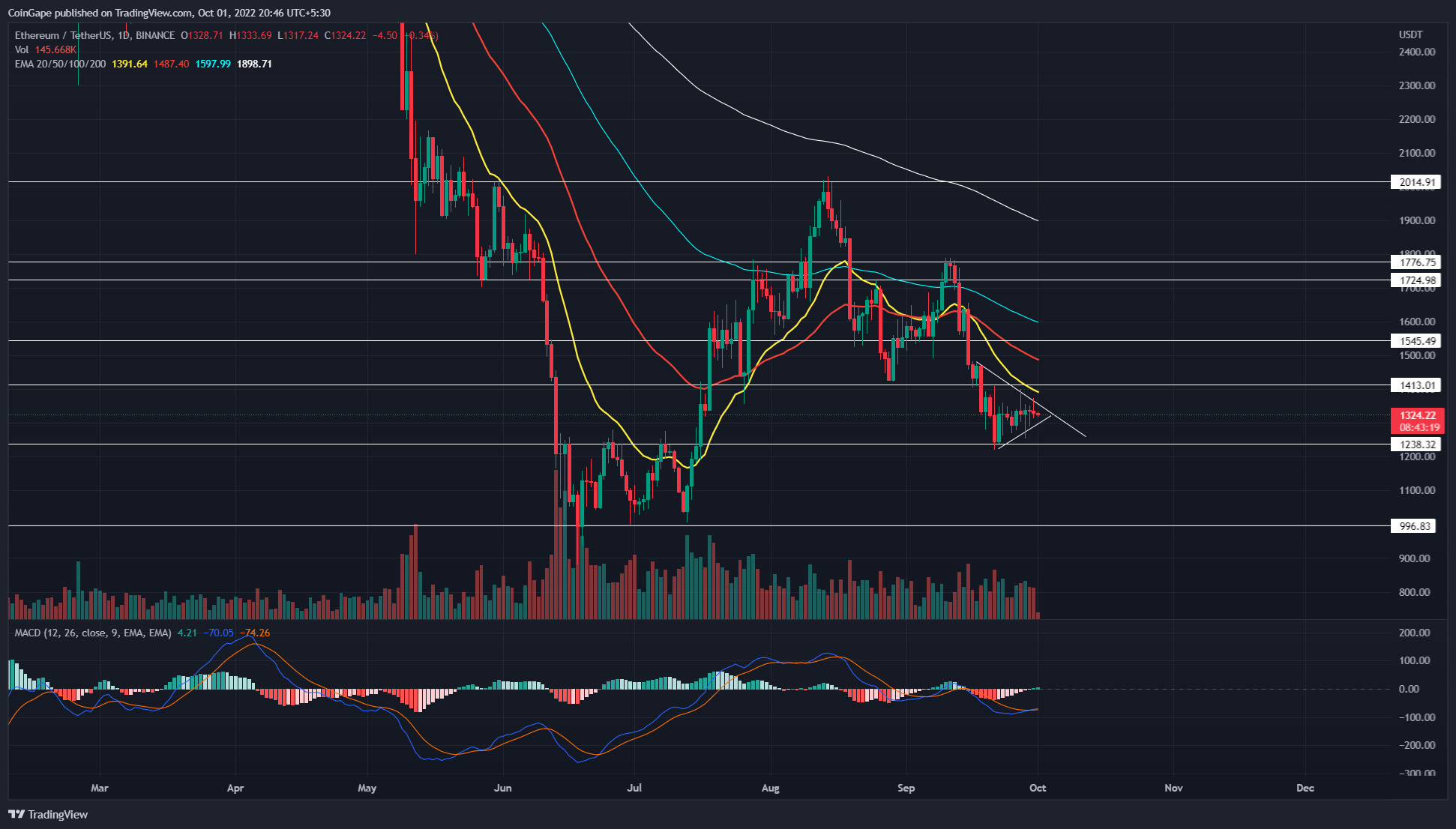 The inverted pennant pattern is a continuation pattern that accelerates the ongoing bearish momentum. In theory, the pattern technical set-up offers a short break, where price resonates within two converging triangles resembling a symmetrical triangle.

Thus, the Ethereum price wavering between $1400 and $1230 can be considered a no-trading. Moreover, the high wick rejection on either side reflects high volatility in market sentiment. The coin price currently trades at $1323 and shows an intraday loss of 0.4%.

With sustained selling, the altcoin should retest the lower trendline for another breakdown attempt. A four-hour candle closing below the support trendline will trigger this pattern and a selling opportunity for traders.

Moreover, this breakdown will act as a catalyst to breach the aforementioned $1230 support. Thus, losing the $1230 support will intensify the selling pressure and open the path to the $1000 mark.

On a contrary note, if the buyers manage to break the pattern’s resistance trendline, a possible relief rally may drive the Ethereum price to $1550 resistance.

EMAs: the downsloping EMAs(20, 50, 100, and 200) indicate an established bear trend. Moreover, the 20-day EMA closing near coin price could assist sellers in resuming the ongoing downfall.

MACD indicator: despite the bearish crossover, the failure of MACD and signal line to give sufficient spread indicate traders are struggling to maintain sustained buying. Moreover, these slopes below the midline suggest the overall sentiment is bearish.

From the past 5 years I working in Journalism. I follow the Blockchain & Cryptocurrency from last 3 years. I have written on a variety of different topics including fashion, beauty, entertainment, and finance. raech out to me at brian (at) coingape.com

The presented content may include the personal opinion of the author and is subject to market condition. Do your market research before investing in cryptocurrencies. The author or the publication does not hold any responsibility for your personal financial loss.