With 2021 just about in the rearview mirror, it’s a good time to reassess the notion that cryptocurrency is still a risk-on asset class. After all, crypto’s risk will help determine how to allocate assets in 2022.

For many traders, the massive selloff of March 2020 is still a memory, be it one of great pain or profit. Bitcoin and ether as well as just about every cryptocurrency took a nosedive as if they were chained to falling equities and bond yields back then. It was around that time we started to hear the refrain that crypto is a risk-on bet, meaning it performs well when investors are feeling adventurous and poorly when they get skittish.

And it may be risk-on, since it’s a wager on the future of finance; if money is going to move to the blockchain, owning the money of the blockchain is a reasonable way to play it.

Of course, here’s where one inserts an obvious chart: One showing a stack of correlations.

The black line shows the correlation between bitcoin and the S&P 500, the index that represents the U.S. stock market. If equities are generally a risk-on bet (compared to bonds), then one would assume bitcoin would be highly correlated to the index or at least move in that direction.

Except, well… no, it’s not. At its peak two months ago, the 90-day correlation coefficient between bitcoin and the S&P 500 peaked at around 0.31. That’s quite weak. At its 2021 nadir in June, the coefficient was -0.04, meaning there was statistically no relationship between prices of U.S. stocks and bitcoin.

So, one also throws in a red line showing bitcoin’s correlation with gold. Given the cryptocurrency’s limited supply of 21 million coins, it should serve as an inflation hedge in a world where the Federal Reserve and the U.S. government think of new ways to flood the market.

No dice there, either. The 90-day correlation between bitcoin and gold saw its 2021 peak in early January, also at 0.30. It has since been flopping around the 0 line vainly like a fish a few seconds before getting bopped in the head on deck. Its lowest point was -0.18 back in August and it’s at a measly 0.07. Gold and bitcoin aren’t trading together.

Exasperated, one throws up a final line: bitcoin’s correlation with bonds, represented by the iShares 20+ Year Treasury Bond ETF (TLT, in yellow). If the cryptocurrency isn’t trading with stocks or gold, surely, it’s tight with bonds, right? Wrong. Compared to the others, that line is sticking to 0 the way Seth Rogen sticks to bad scripts. That also holds for commodities (as represented in green by the iShares S&P GSCI Commodity-Indexed Trust).

There are several reasons why bitcoin doesn’t correlate with these major macro assets. Some of it has to do with its value proposition. Another may be because crypto markets are still in their infancy and are thus pushed around by a handful of major players, whether people like to acknowledge it or not.

The upside for a portfolio manager is that low correlations with other asset classes makes crypto something that must be at least considered for a portfolio to boost diversification.

The downside is that non-stablecoin crypto — even its “safest” one, bitcoin — is dreadfully volatile. 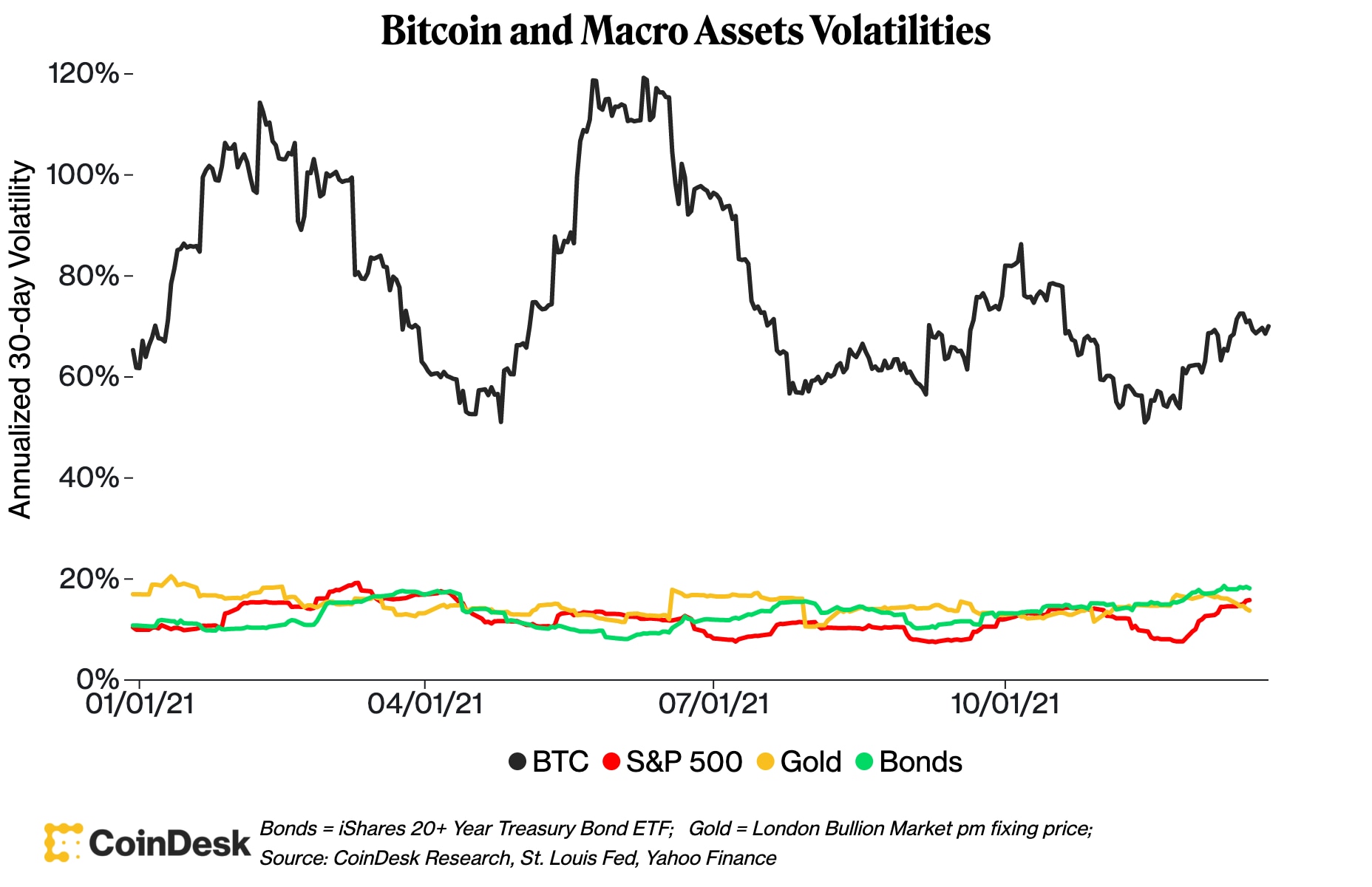 Still, the perception that bitcoin is correlated to other risk-on assets or gold persists but what happens in the next couple of quarters will test that thesis, according to Chen LI, CEO of venture firm Youbit Capital. He expects risk-on assets to fall as interest rates rise with the Fed’s tapering of its bond-buying program (bond yields go up when bond prices fall, which is anticipated since the central bank won’t be as much in the market to buy as it used to be).

“We’re going to see if bitcoin can hold up to the gravity,” Li told CoinDesk’s First Mover program on Thursday.

Where Li sees correlations breaking down isn’t between macro assets and, say, bitcoin but between bitcoin and other cryptocurrencies.

Between bitcoin and ether, the 90-day correlation coefficient is at a very high 0.80 even though ether trounced bitcoin’s returns in 2021, as did many others. 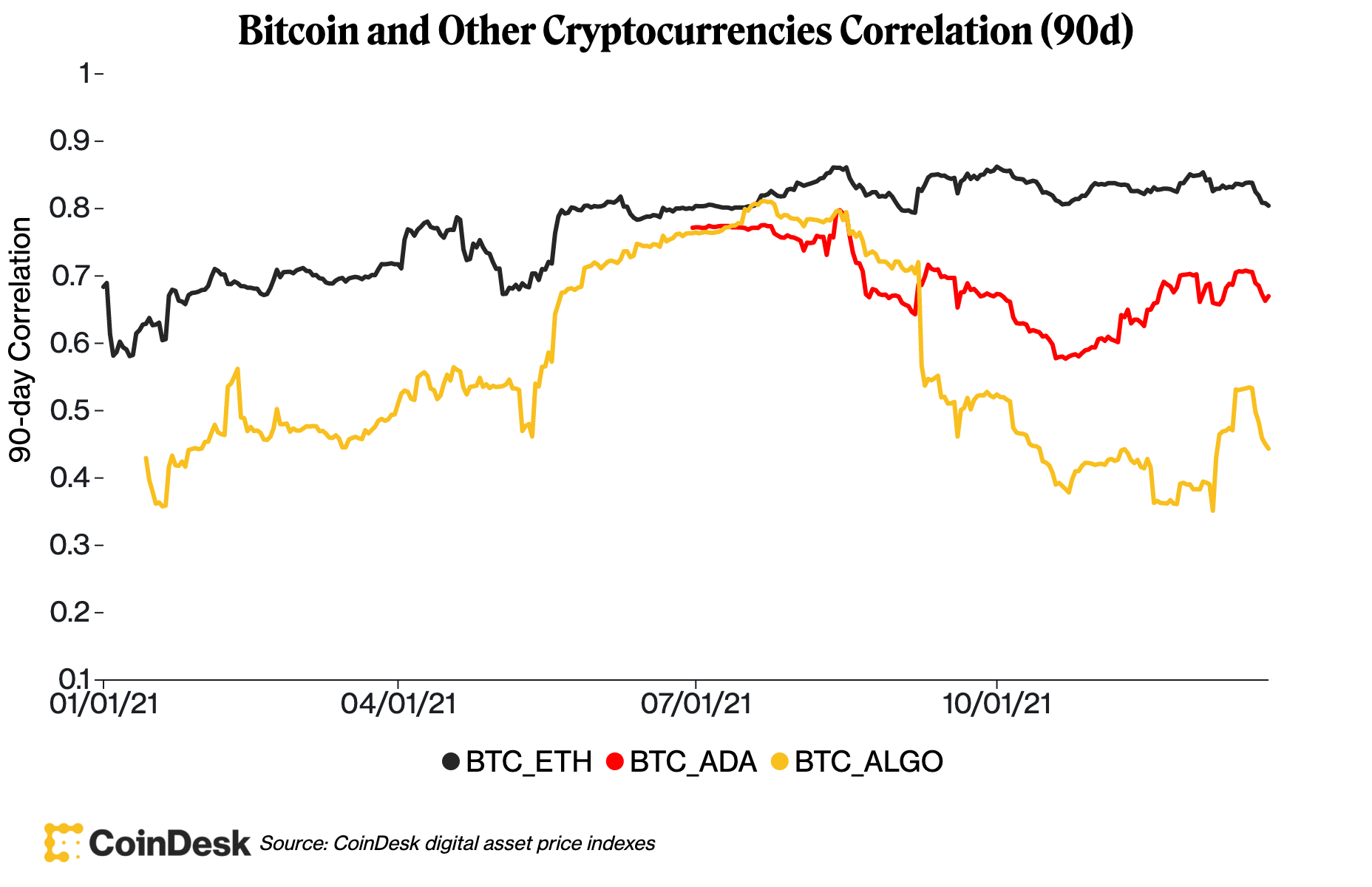 However, the correlation coefficients are somewhat lower for the native tokens of Ethereum competitors. Li holds that those correlations will fall as well as other smart-contract platforms see more adoption. And there’s one more contributing factor he sees, and it’s one that may not be so intuitive: it’s how the assets are traded.

“In centralized and dexes [decentralized exchanges] we are seeing more volumes in the stablecoin pairs instead of the BTC or Ethereum pairs,” Li said. “Because… alternative tokens are traded against stablecoins, the correlation between Ethereum [or] bitcoin just went down.”

If a cryptocurrency is mostly priced against another cryptocurrency such as bitcoin, they will just move together, Li said. Trades against stablecoins, which are often pegged to the U.S. dollar, break those currencies’ connection to the likes of bitcoin and ether, he added.

Perhaps, then, 2022 will be the year altcoins become more uncorrelated with bitcoin which, in turn, is uncorrelated with macro assets. In that case, we could be seeing a world where traditional portfolio managers will have to give the alts a once-over at the bare minimum just to have a diversified portfolio.

That should be interesting.