The EOS/USDT pair struggled to surpass the $1.413 supply zone over the past three months and formed a range-bound rally. However, this consolidation phase shaped into an inverted head and shoulder pattern, indicating a recovery opportunity for coin holders. After a minor correction, the price shows another attempt to reclaim the $1.41 mark.

The EOS price gave a high momentum breakout from the $1.4
The 50-day EMA acts as a dynamic support
The intraday trading volume in the EOS is $749.5 Billion, indicating a 131% gain 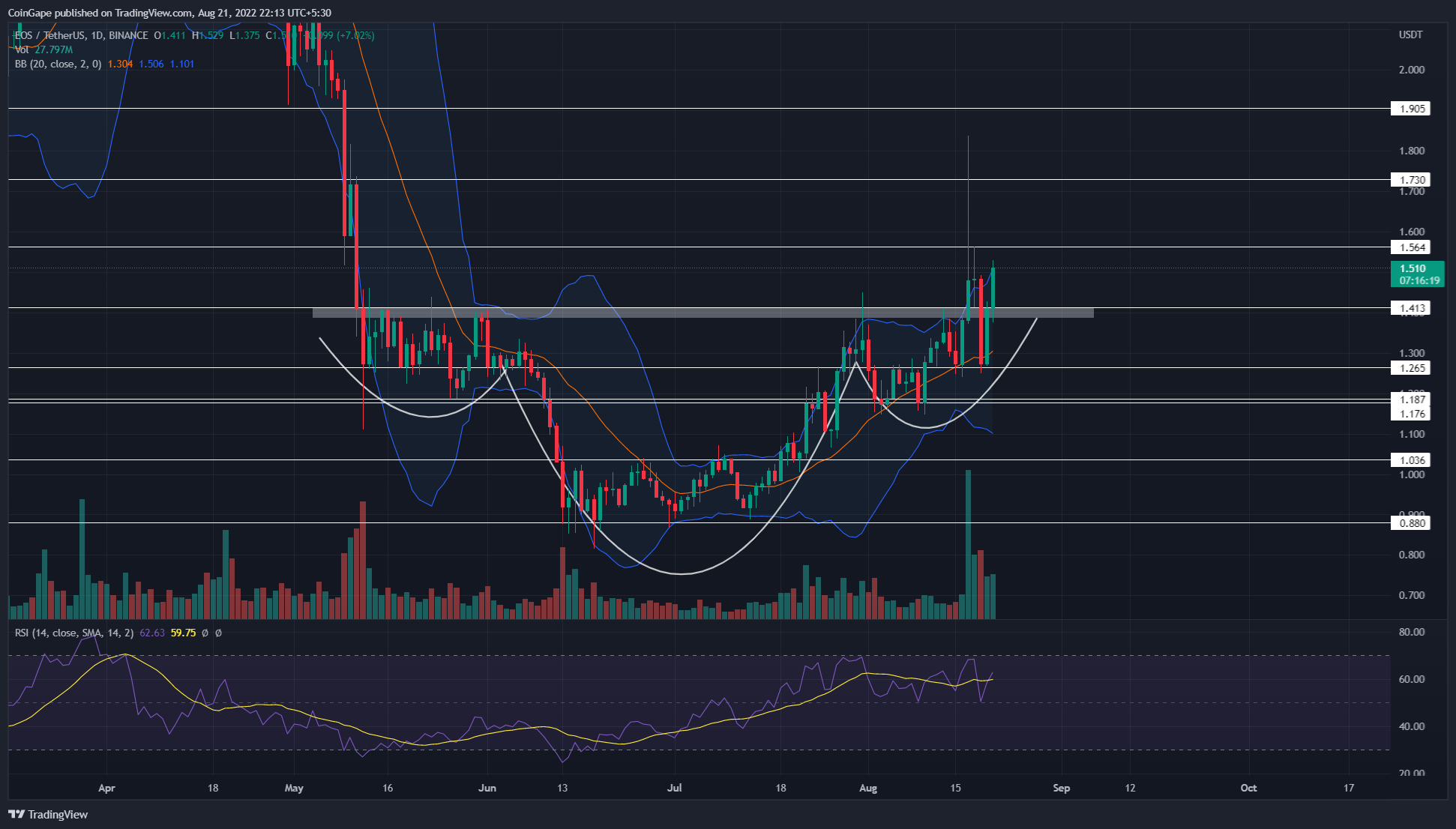 The bullish reversal pattern theoretically provides a phenomenal rally once the coin price breaches its neckline resistance. Moreover, the expected target for the pattern is the same distance from the low of the head portion to the neckline, shot from the breakout point.

Furthermore, the EOS price triggered this pattern on august 17th, when the price gave a massive breakout from the $1.413 resistance. However, the crypto market witnessed sudden pressure on August 19th, as the US Fed suggested a 0.75% interest hike in September.

As a result, the EOS price failed to sustain above the $1.413 mark, indicating a fakeout. The panicked holders may have exited at this point, but the immediate support of $1.26 prevented further downfall.

Moreover, the replenished bullish momentum pushed the prices 17% higher, indicating another breakout attempt. If the EOS price sustains this time, the resulting rally may surge above $1.564 for better confirmation.

Additionally, in response to the bullish pattern, the post-breakout rally should drive the price 34.8% higher to hit $1.9.

Conversely, if the selling pressure persists in the market, another breakdown from $1.14 will trigger a more prolonged correction.

Bollinger band indicator: the EOS price constantly hitting the indicator’s upper band indicates strong selling in the market. However, the prices retesting this resistance are usually followed by a retracement to the midline.

From the past 5 years I working in Journalism. I follow the Blockchain & Cryptocurrency from last 3 years. I have written on a variety of different topics including fashion, beauty, entertainment, and finance. raech out to me at brian (at) coingape.com

The presented content may include the personal opinion of the author and is subject to market condition. Do your market research before investing in cryptocurrencies. The author or the publication does not hold any responsibility for your personal financial loss.