While still leading the securities litigation, hedge fund and SEC defense national practices at my last law firm, BakerHostetler, my practice team members and I would prepare an annual list of key developments and cases in the area each December.

It was usually a top 10 list that was then published by Wolters Kluwer in one of its CCH publications and by BakerHostetler as a separate publication to our law firm clients. Now that I am officially “retired” from law firm practice and these days devote most of my professional attention to the blockchain and crypto space, my editor, Max Yakubowski, and I thought it made sense to do something similar for Cointelegraph’s readers.

Powers On… is a monthly opinion column from Marc Powers, who spent much of his 40-year legal career working with complex securities-related cases in the United States after a stint with the SEC. He is now an adjunct professor at Florida International University College of Law, where he teaches a course on “Blockchain, Crypto and Regulatory Considerations.”

So, here is my top five list for 2021. It has some caveats attached. For one, the blockchain space has so many dimensions, some implicating finance and many that do not. The use cases for this ledger technology expand each year, constrained only by human ingenuity. This list focuses on developments this year that affect financial transactions and systems. It also focuses on what I perceive as key regulation, legislation and litigation affecting the ecosystem. Next, this is a top five list, not a top 10 one. While yes, there are dozens of issues and items that are transformative, that would be a much longer piece. Finally, some of the items on the list I have already written about in prior columns, so they will be familiar to regular readers. As a result, I don’t feel the need to provide lengthy explanations as to why an item made the list.

Back in June, at the Bitcoin 2021 conference in Miami, Salvadoran President Nayib Bukele announced he would seek to have El Salvador adopt Bitcoin as a national currency. At the time, the country had used the U.S. dollar as its official currency since 2001, abandoning at the time its local currency, the colón. In short order, the country’s legislative body adopted laws mandating that beginning in September, all commercial establishments must accept Bitcoin as legal tender, with some exceptions. Wallets containing $30 in BTC have also been made available to citizens by the tiny country’s banks. This was not a voluntary choice for businesses; rather, it was required, which makes this event so significant.

It was a watershed moment for sovereign nations, as other countries have begun efforts to do the same, including Panama and Ukraine. While other countries have adopted blockchain technology for parts of their financial and governmental systems — such as Georgia mandating that government real estate auctions occur on a blockchain — this is different and more significant. It is for the entire country’s economy.

In November, Congress finally passed the Biden administration’s $1.2 trillion infrastructure legislation— at least the piece of the proposed legislation that actually was directed at building and rebuilding our bridges, roads, rails and telecommunications. As part of the bill, formally called the Infrastructure Investment and Jobs Act, there is an amendment to Section 6045 of the tax code, which requires the reporting to citizens engaged in securities transactions, with an overly broad definition of “brokers.” It mandates tax reporting information by traditional brokerage firms of their customers. However, the bill arguably could be interpreted to impose this significant reporting requirement on blockchain miners and developers, which many in Congress believe is bad for crypto and overbearing.

The importance of this tax provision is that it is one of the first efforts of the federal government “to better incorporate digital assets, like virtual currency, into our nation’s tax code,” according to a Dec. 14 letter from six senators to Treasury Secretary Janet Yellen, whether Yellen does as they ask or not. These senators are Rob Portman, Mark Warner, Kyrsten Sinema, Cynthia Lummis, Pat Toomey and Mike Crapo — members of both major political parties. It is also significant that not only is there support for the technology in the Senate, there is now also a Congressional Blockchain Caucus.

The caucus is a bipartisan group of members of the House of Representatives dedicated to advancing the technology with “a light touch regulatory approach,” according to its mission statement. Back in August 2020, it wrote to the Internal Revenue Service seeking clarity on how the agency would be taxing the block rewards arising from the proof-of-stake validation process. As of this writing, the caucus website lists 35 members of the House, a significant number.

3. Federal Reserve Chair Powell is open to the benefits of blockchain for the financial system

On more than one occasion this past year, Federal Reserve Chairman Jerome Powell has stated publicly and in congressional hearings that he sees certain benefits for the world and U.S. financial systems in utilizing blockchain and digital assets. Back in March, he stated on CNBC that while Bitcoin was not a very good store of value or currency, it was a speculative asset like gold. Thereafter, he made clear that the Fed has no intention of banning crypto. 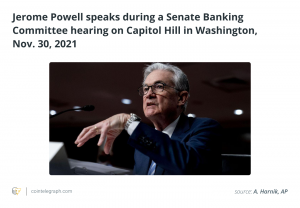 If you think back a few years, cryptocurrencies — and the blockchains from where they come — were verboten in the federal government. No one was allowed to embrace them. So, it seems to me that there has been a clear evolution and maturation of thinking on the part of Powell about these things and the useful aspects of digital assets for our economy and the world’s financial system. Given Powell’s considerable influence over our economy and economic stability, likely even more so than our president, this is a very positive development. All of this talk seems like a precursor to a central bank digital currency being issued by the Fed.

The new Securities and Exchange Commission chairman, Gary Gensler, has a clear bias toward his former employer, the Commodity Futures Trading Commission, where he served as chair from 2009 to 2014. Yet, he is still advancing the ball for crypto, albeit slowly.

For several years now, various financial companies have sought to sell exchange-traded funds based upon Bitcoin and other digital assets. ETFs hold a basket of securities or assets, such as the S&P 500 ETF, which holds all of the securities in the S&P 500 Index. ETFs are generally less costly investment products for retail investors than mutual funds. Yet, pointedly during the chairmanship of former SEC Chair Jay Clayton, each time one of the more than a dozen ETFs were presented to the SEC, it failed to approve the effectiveness of the public offering, effectively killing it.

In October, however, things changed. The SEC allowed the first Bitcoin-based ETF to trade in public U.S. markets: the ProShares Bitcoin futures ETF. Yet, there was a catch. The ETF approved is based upon Bitcoin futures, not the underlying BTC itself found in the spot market, revealing Gensler’s biases from his years at the CFTC. To me, there is no legitimate rationale for allowing a futures-based ETF but not a spot-based one. Indeed, a futures-based ETF, which requires a rolling over of futures contracts, is more expensive to manage.

Also, it is restricted in the number of contracts that can be purchased under current CFTC position limits rules. There is no similar restriction for spot ETFs. The claim that the markets for Bitcoin have been in regulated marketplaces such as the CME for years and thus the futures marketplace is a more stable and orderly marketplace for an ETF is bunk. Nonetheless, at some point, a spot ETF will be approved, and the fact that all retail investors can now buy Bitcoin, even if derivatively, is a significant advancement for both the technology and alternative asset.

5. Ripple fights the SEC in court

In the waning days of the lame-duck Clayton-led SEC in December 2020, the Commission authorized and filed a lawsuit against Ripple and two of its principals, alleging the defendants engaged in unregistered public securities offerings of XRP over a period of years. As discussed in one of my columns earlier this year, it was an ill-advised, overly aggressive action that did not need to be brought.

Among other reasons, it is questionable whether the XRP token was a “security” under the federal securities laws. Also, another government regulator, the Financial Crimes Enforcement Network, had previously complained in 2013 to Ripple that its offerings constituted “currency” exchanges, thus subjecting Ripple to register as a money services business “exchanger” with the agency. So, Ripple registered and was fined $700,000 by FinCEN as a penalty for registration and AML violations in 2015, only to have a separate federal agency — the SEC — claim five years later that the same offerings were public offerings of “securities.” Repetitive actions by multiple U.S. regulators for similar underlying transactions are unfair and unnecessary.

If I was a betting man, which I am, I would say the SEC will lose this fight — by which I mean the court either will find that XRP is not a “security,” that the sales of XRP by Ripple’s principals were not public offerings here in the United States, or that an injunction against the defendants is neither necessary nor granted. This fight and the subsequent decision by Judge Analisa Torres could be monumental.

There you have it, readers — my top five list.

Enjoy the holidays, and may we soon defeat COVID-19 worldwide. You will soon be hearing my ruminations again in 2022!

Marc Powers is currently an adjunct professor at Florida International University College of Law, where he is teaching “Blockchain, Crypto and Regulatory Considerations” and “Fintech Law.” He recently retired from practicing at an Am Law 100 law firm, where he built both its national securities litigation and regulatory enforcement practice team and its hedge fund industry practice. Marc started his legal career in the SEC’s Enforcement Division. During his 40 years in law, he was involved in representations including the Bernie Madoff Ponzi scheme, a recent presidential pardon and the Martha Stewart insider trading trial.

The opinions expressed are the author’s alone and do not necessarily reflect the views of Cointelegraph nor Florida International University College of Law or its affiliates. This article is for general information purposes and is not intended to be and should not be taken as legal or investment advice.